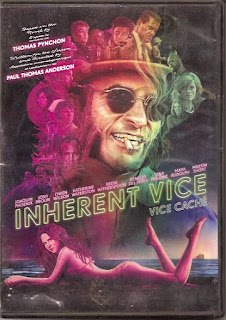 Offbeat Detective Movie #3
Synopsis: Hippie detective looks into….wait, wasn’t this ground covered by Al Pacino in Serpico, or Richard Dreyfus in The Big Fix?
Blurb From the VHS Jacket: “From Paul Thomas Anderson and Thomas Pynchon, it’s the tail end of the psychedelic ‘60s and paranoia is running the day from the desert to the sea of sunny Southern California.”
What Did I Learn?: 1) Inherent vice in a maritime insurance policy is anything that you can’t avoid. 2) Shelter is supposed to be for free…for free!!
You Might Like This Movie If: scenes like this one make sense to you.
Really?: Inherent Vice is a very trippy comedic thriller, so I can overlook some of its weirder elements, but gee - I’m not sure what to think of Doc returning an entire carload of heroin to the villains at the end. That doesn’t seem terribly heroic. Oh, and can anyone tell me what Sortilege’s rambling and incoherent voice-over narration adds to our understanding of the story?
Rating: When I purchased my copy of Inherent Vice at the local Value Village, the cashier informed me she loves this film, and I would, too. Inherent Vice isn’t a bad stoner-detective movie (it’s something along the lines of The Big Lebowski meets Night Moves) - it certainly has some funny moments, but it’s far too long, the plot is convoluted and loaded with sub-plots which are never satisfactorily resolved (along with too many cameo appearances), and nothing really happens for long stretches. Still, I liked Reese Witherspoon as the Assistant DA with a heart of gold, and Josh Brolin pretty much steals the film as Doc’s arch-nemesis, Bigfoot the cop. 6.5/10 stars.