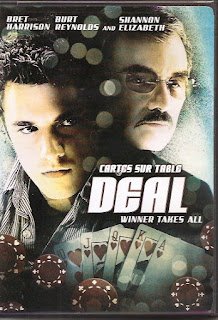 This could have worked for my salute to Burt Reynolds a few years ago.
Synopsis: Did you ever want to see an atrociously-written, ridiculously predictable, and bargain-basement-budget remake of The Color of Money, featuring cards instead of billiards, and lacking both suspense and a strong female lead? This is your lucky day.
Blurb From the DVD Jacket: "Deal yourself in for high-speed thrills and high-stakes poker action in this triumphant tale of cards and courage starring Burt Reynolds, Bret Harrison and Shannon Elizabeth."
What Did I Learn?: Quite honestly, I don’t think I learned anything from this movie. Tommy (Reynolds) apparently teaches Alex (Bret Harrison) the psychology of the game of poker (i.e. how to read your opponents) and the audience is never provided with any information!
You Might Like This Movie If: You're in the mood for a game of high-stakes poker.
Really?: 1) Holy cow, why did Jennifer Tilly agree to take part in this film? She makes two cameo appearances and barely says a word. (Come to think of it, that sounds like Charles Durning’s involvement with this turkey, too). 2) So, the big tournament comes down to Tommy and Alex and the loser walks home with $4.1 million? Why are we supposed to care, exactly? 3) Wait, Alex has a job, right? How can he do it and still attend all of those late-night, and out-of-town poker tournaments? This is never really explained. 4) Did writer/director Gil Cates Jr. ever learn that exposition is best used sparingly in a movie script, or that the most intriguing films are the ones that allow the viewers to figure things out on their own? It’s bad enough when Durning’s character spells out Tommy’s motivations to his estranged wife (who puts aside her deep mistrust of gambling and rallies to his side!), but allowing a couple of sports announcers to provide blow-by-blow commentary during the tournament? Bad writing.
Rating: Deal is one of the most unoriginal, uninspired, and completely pointless movies I have ever encountered (see: “Synopsis,” “What Did I Learn?” and “Really?”). I cannot recommend this movie. 2/10 stars.
Would it Work For a Bad Movie Night?: Probably not, but take a drink any time you get the impression Reynolds is basically just sleep-walking through his role.