The Assassination of Jesse James by the Coward Robert Ford (2007) 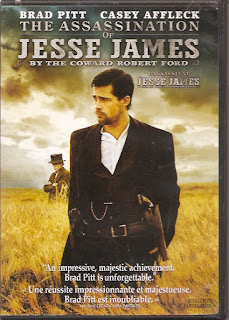 Synopsis: Narcissistic outlaw befriends creepy stalker.
Blurb From the DVD Jacket: “Everyone in 1880s America knows Jesse James. He’s the nation’s most notorious criminal, hunted by the law in 10 states. He’s also the land’s greatest hero, lauded as a Robin Hood by the public. Robert Ford? No one knows him. Not yet.”
What Did I Learn?: If all of your buddies tell you the new guy in your entourage gives them the willies, and they're a bunch of hardened killers, you might want to listen to them.
You Might Like This Movie If: you know that Jesse James was baaaaaaaaaaaaad news.
Really?: 1) Holy shit, how many scenes of clouds speeding across the sky did photography director Roger Deakins jam into this film? 2) I realize all of this is based upon a true story, but wow…it’s hard to believe Ford personally re-enacted the moment he shot an unarmed man in the back over 800 times. That’s just creepy. 3) You know, I’m pretty sure the Rocky Mountains don’t extend into Missouri.
Rating: Much like Once Upon a Time in America, you really have to be in the mood to sit down and watch The Assassination of Jesse James by the Coward Robert Ford. Clocking in at nearly three hours (I’m not giving away any spoilers when I tell you Jesse doesn’t make it to the end), the film is a bit long for my taste, and it’s very slow-moving - don’t expect a John Wayne-style shoot-em-up Western. Still, The Assassination benefits from an intelligently-written script with some interesting things to say about the emergence of celebrity culture in the 19th century, as well as fine performances from Pitt and Affleck. 8/10 stars.