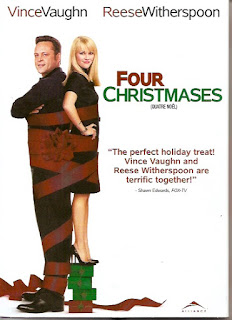 Christmas Movie #2 - Merry Christmas!
Synopsis: Did you ever want to see Vince Vaughn and Reese Witherspoon get emotionally, verbally and physically abused by four sets of people for 90 minutes? Step right up folks, this is your lucky day! (Come to think of it, that sounds a bit like the Synopsis for Wedding Crashers).
Blurb From the DVD Jacket: “Every Christmas happily unmarried Brad and Kate escape divorced parents and exasperating relatives by getting on a plane. This year a fog rolls in that even Rudolph’s nose couldn’t illuminate.”
What Did I Learn?: It’s rather difficult to sleep with your best friend’s mom and remain best friends.
You Might Like This Movie If: You'll watch anything that's Christmas-related.
Really?: So, in the course of two minutes, Brad and Kate are invited to four separate events because they’re dumb enough to speak to a TV reporter doing a live broadcast? Why would all four parents be watching at the same time? Come to think of it, Brad’s father (Robert Duvall, whose performance might be the best thing in this Christmas turkey) uses his television as a radio, for crying out loud!
Rating: Four Christmases is one of the worst holiday-themed films I have ever encountered - I mean, we’re talking Santa With Muscles bad! Four Christmases is loud, crude, unfunny, and surprisingly mean-spirited for holiday fare (see: “Synopsis”); the premise is that sophisticated urbanites Brad and Kate are forced to interact with their red-state relatives, who are all obnoxious caricatures, and nothing good comes from these encounters. What’s the moral of this story? Family is best avoided, even during the Holidays? I cannot recommend this movie. 2/10 stars.
Would it Work for a Bad Movie Night?: Probably not, but take a drink of spiked eggnog any time Brad and Kate soldier on through Holiday Hell when any normal person would say: “screw this,” and simply return home.