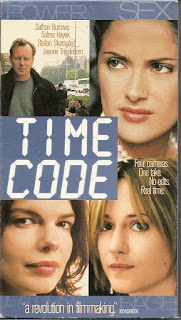 Salute to Surveillance Movie #1 (Please click the links to read my reviews of some other surveillance-themed movies: The Conversation, and A Scanner, Darkly)

Synopsis: Ever wanted to watch four simultaneous security camera feeds for 90 minutes? This is your lucky day...


Blurb From the VHS Jacket: "Four cameras. One take. No edits. Real time."


What Did I Learn?: You can't hit the viewer with a cacophony of overlapping sounds and dialogue from the visual confusion of four separate on-screen quadrants and then call it a movie.


You Might Like This Movie If: You think movies are at their very best when broken down into separate mini-movies, and then plotted along a coordinate plane.


Really?: 1) Lauren (Jeanne Tripplehorn) is obviously a successful businesswoman - she rides around in a limousine, for instance - so wouldn't she have better things to do than spy on her girlfriend during an audition? Wouldn't she probably hire a private detective? 2) Jeez Louise, what's with all the earthquakes? Ok, I realize the first one establishes that we're seeing four real-time stories that are set in the same time and place, but the rest are completely unnecessary. 3) See: "Synopsis" and "What Did I Learn?" Seriously, I'd love to know who gave this picture the green light.


Rating: I have to give Timecode a few stars for daring, originality, and some clever writing (there's a scene near the end when an avant-garde filmmaker outlines her vision for a project that sounds a lot like Timecode, although hers sounds a lot more interesting!), but it is otherwise unwatchable for some pretty obvious reasons. I cannot recommend this movie. 3/10 stars.

Would it Work For a Bad Movie Night?: Probably not, but take a drink any time you simply can't follow the story.