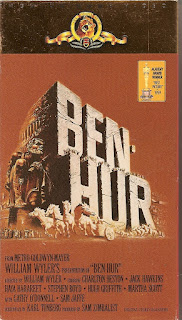 Roman Epic #2 (Hey this would have been perfect for my salute to Revenge films a few years ago!)

Synopsis: Likable Jewish prince is sent into slavery. But then he gets one lucky break after another...

Blurb From the VHS Jacket: “Ben-Hur, a peace-loving prince of Judea, leads his nation against the wrath of the conquering Romans. His self-imposed destiny brings tragedy to himself, and his people, as he learns how to fight, to love, to hate and, finally, to forgive.”

What Did I Learn?: If you want to impress your host, it’s a good idea to let out a loud belch after dinner.

You Might Like This Movie If: You really want to see the scene that inspired this scene.

Really?: 1) Funny how none of these people (well, except Haya Harareet) look even remotely Middle Eastern. 2) So, Messala is allowed to use spiked wheels on his chariot? If there aren’t any rules on the subject, why wouldn’t the other charioteers follow suit and spike their own wheels? This doesn’t make any sense. 3) I had a hard time believing Messala would throw Ben Hur and his family into prison knowing their innocence. Ok, Judah told him he wouldn’t rat on his fellow countrymen, but couldn’t Messala use the family’s freedom as a bargaining chip? 4) Early on, Judah alludes to the fact that Jewish society was greatly divided during Roman times, yet this theme is never expanded or explored. When Jesus preaches, for instance, all of the local Jews flock to him, and nobody except the Romans disagree with his teachings.

Rating: I have to give Ben-Hur a bit of a mixed review. While it’s a visually-stunning film that’s worth watching if only to enjoy its 20-minute chariot race (see: “You Might Like This Movie If”), at three hours and 31 minutes, it’s far too long for my taste, and much like Spartacus, it suffers from strange pacing and an anticlimactic  third act; once Judah’s antagonist bites the dust, the rest of the movie consists of him pining for his mother and sister in the local leper colony, and otherwise getting religious. By the end, I kept asking myself: “when is this thing going to end?” 7/10 stars.