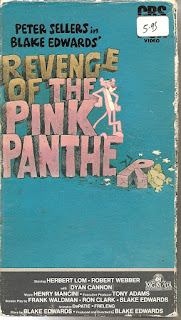 Synopsis: A powerful drug syndicate wants to make a bold statement by...oh, who cares? It's another excuse for Peter Sellers to wear a bunch of silly and completely unnecessary costumes, mispronounce words such as "bump" and "room", and break stuff.

What Did I Learn?: If you want to go undercover on the Left Bank, your best course of action is to don a Toulouse-Lautrec disguise.


You Might Like This Movie If: It saddens you to think the Pink Panther franchise truly died with Peter Sellers.


Really?: 1) Let me get this straight: at the end of the last movie, Chief Inspector Dreyfus was disintegrated after attempting to obliterate England, and yet now he's alive and kicking. Even stranger, the French police offer him his former job without any reduction in rank or pay, and there isn't one word of explanation. 2) So, Douvier and Simone are both supposed to be French, yet Edwards chose Robert Webber and Dyan Cannon? Gee, that's some great casting, Blake. 3) I realize the Pink Panther films are screwball comedies that shouldn't be taken too seriously, but why would an American mafia boss travel all the way to Hong Kong to take possession of a boatload of heroin? Wouldn't he have underlings to do that? 4) Take a drink every time Clouseau describes Cato as "yellow". Talk about cringe-inducing...


Rating: I've always had a place in my heart for Revenge of the Pink Panther because my mom took me to see this film near the end of 1978. That said, I have to admit that it's also the weakest of the Panther flicks. The movie has some obvious credibility flaws that reflect lazy writing (I could have greatly expanded the "Really?" section to include a whole lot of completely implausible coincidences, such as Clouseau and Simone breaking into Dreyfus' apartment), but its biggest problem is that there are long stretches without Clouseau, and it simply isn't funny when he's not on screen. Oh, watch for Herbert Lom's giggling eulogy to Clouseau - it's my favourite part. 6.5/10 stars.