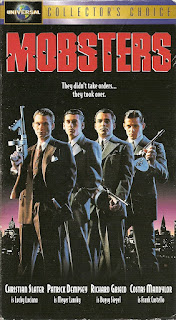 Synopsis: Ok, start with Once Upon a Time in America, and then dumb it down until you’ve got Young Guns with three-piece suits.

Blurb From the VHS Jacket: “Four of today’s top young actors star in this fast-paced action-adventure based on the true story of the rise of organized crime in America.”

What Did I Learn?: 1) Emotion is dangerous. 2) The secret of America is money. 3) Every organization needs somebody standin' out front. Call it a figurehead, a leader, a headman, a kingpin, a president, whatever.

You Might Like This Movie If: You'll watch anything from 1991.
Really?: Wait – Meyer Lansky addresses Benjamin Siegel as “Bugsy”? I’m pretty sure he hated that nickname. I’m also pretty sure that Abraham Rothstein was murdered over a gambling debt, and not because of a gang war. And where’s Dutch Shultz? He was part of that gang. Didn’t Michael Mahern do any research before he put pen to paper?

Rating: Mobsters is fine if you’re looking for an evening’s entertainment, but it’s strictly a B movie with a few stars. Aside from several historical inaccuracies (see: “Really?”) and a script that leads to a few too many Tommy-gun shootouts for my taste (see: “Synopsis”), the biggest problem with Mobsters is its refusal to take its subject matter seriously. Luciano, Lansky, Siegel et al were thugs and killers, yet they’re portrayed as Runyonesque heroes simply because their enemies were even worse. Something about this film rubbed me the wrong way. 6/10 stars.