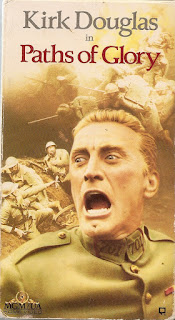 Synopsis: Dashing officer defends railroaded men against sadistic war-monger during military court-martial. Oh wait, that’s the Synopsis for A Few Good Men... and Breaker Morant, come to think of it.

Blurb From the VHS Jacket: “No motion picture has more effectively dramatized the absurdity of war than this Stanley Kubrick masterpiece, capturing the feel, smell and taste of battle – as did Kubrick in his recent Vietnam opus, Full Metal Jacket.”

What Did I Learn?: Apparently, the French Army had a practice of drawing lots for capital punishment when an entire unit was deemed to have disgraced itself. Gee, I’ll bet that did wonders for morale...

You Might Like This Movie If: You firmly believe it would make a super-duper board game.
Really?: 1) Hmm...so Colonel Dax (Kirk Douglas) was one of France’s most talented criminal defence lawyers before the war, and now he has to defend three of his men in a court-martial? That’s a wee bit convenient, isn’t it? 2) I had a bit of a hard time believing General Mireau could order his artillery to fire upon his own men without suspecting he might face some sort of blowback.

Rating: Paths of Glory is a bit slow-moving and depressing, but it’s a memorable anti-war film that features an outstanding performance from Douglas. Highly recommended. 9/10 stars.