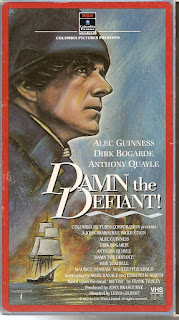 Please click the links to read my reviews of Master and Commander: The Far Side of the World, Mutiny on the Bounty, and The Bounty.

Synopsis: It’s a bit like Mutiny on the Bounty, except Fletcher Christian is a sadistic and selfish asshole, while Captain Bligh is the nicest bloke in the fleet.

Blurb From the VHS Jacket: “Alec Guinness must battle a mutinous crew and Napoleon’s fleet in the rousing, historical adventure, DAMN THE DEFIANT!” (Incredibly, the VHS jacket actually gives away the entire plot!)

What Did I Learn?: If somebody asks if you’re related to an admiral who shares your last name, the best answer is “no” – because it’s probably a trick question.

You Might Like This Movie If: you really want to see Alec Guinness defy a popular uprising.
Really?: Hmm... so, first mate Scott-Padget thinks nothing of using his connections to run roughshod over captains, and he enjoys humiliating and punishing the crews who serve under him. I’m surprised he survived so many years without mysteriously falling overboard, or finding a knife stuck in his back during shore leave.

Rating: Alec Guinness shines as the weak-but-compassionate Captain Crawford in Damn the Defiant, a now-forgotten Horatio Hornblower-inspired sea adventure. DTD is an enjoyable movie, but the plot tends to meander and the audience is cheated out of a final confrontation between Crawford and Scott-Padget. I’d love to see this film remade. 7.5/10 stars.