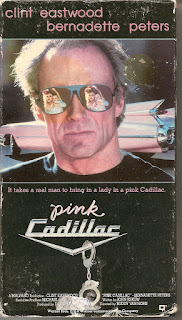 This would have been perfect for my salute to Clint Eastwood.

Synopsis: It’s Clint Eastwood’s greatest cinematic triumph since, um... City Heat and Any Which Way You Can!

Blurb From the VHS Jacket: “Jump bail and skip-tracer Tommy Nowak (Clint Eastwood) will track you down before the ink on your fake ID is dry. Like a Canadian Mountie, he always gets his man. But will he get his woman – especially one who’s got an infant in her arms, a cool quarter-million or so in the trunk of a stolen ’59 Caddy and an army of machine-gunning goons on her trail?”

What Did I Learn?: Guys, if you’re ever wanted by the law, and you somehow receive a phone call from a radio show host who claims you’ve won dinner and a concert with Dolly Parton, START RUNNING.

You Might Like This Movie If: You really want to see Jim Carrey interact with Clint Eastwood.
Really?: Hold on, the white supremacists have no reason (beyond simple paranoia) to suspect that Ricky Z has spoken to Nowak, so why would they take the risk of trashing his studio, and nearly killing him? What if they need his services at some point in the future?

Rating: Pink Cadillac offers a few laughs (mostly from Eastwood poking fun at his tough-guy image), but it’s not one of his better films; clocking in at 121 minutes, Pink Cadillac is a bit too long, the subject matter is a little disturbing (gun-crazy white supremacists terrorizing a family in their home, and firing indiscriminately at a mother and newborn baby), and the ending seems to have been lifted from an episode of the Dukes of Hazard. 6/10 stars.