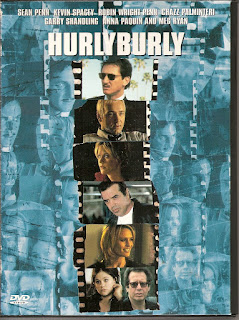 Synopsis: It’s basically two hours of obnoxious cokeheads screaming at each other.

Blurb From the DVD Jacket: “From his posh condo atop the Hollywood Hills, a high powered casting director, Eddie (Sean Penn), his charmed business partner, Mickey (Kevin Spacey) and his friend and would-be actor, Phil (Chazz Palminteri) engage in a wild life of partying and late nights of sex, lies and self-obsession.”

What Did I Learn?: 1) The guy who dies in an accident understands the nature of destiny. 2) “Flip” is not sarcasm. 3) If you want to get laid, it’s a really bad idea to throw your date out of a moving vehicle.

You Might Like This Movie If: You really want to enjoy a cocaine-fueled argument about the merits of French vs. Chinese cuisine.
Really?: 1) Hold on – Artie (Garry Shandling) brings Donna (played by Anna Paquin, who was 16 when this movie was released) over for the boys to basically use as a sex toy, and nobody ever once thinks to ask if she's legally old enough to have sex? 2) I realize Eddie enjoys hanging out with Phil, but I had a hard time believing Mickey or Artie would tolerate him for anything beyond small, and very occasional doses.

Rating: Based on David Rabe’s theatrical play, Hurlyburly is a well-written, and occasionally thought-provoking film that’s well-acted by a small, but accomplished cast. The script includes a number of funny lines (“I am my own biggest distraction” is my favourite), but it suffers from a big problem: none of these characters are even remotely likeable, and it’s very difficult to actually give a crap about Eddie when he finally undergoes his big meltdown at the end. 7.5/10 stars.