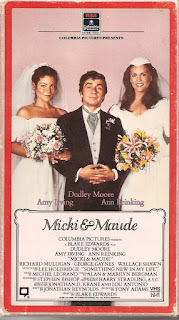 Synopsis: It’s basically two hours of Dudley Moore telling highly implausible lies, followed by a grand finale of him running around like a lunatic inside a busy hospital.

Blurb From the VHS Jacket: “Dudley Moore and director Blake Edwards are reunited in this laugh-packed romp about a lovable bigamist.” [“Lovable bigamist!”]

What Did I Learn?: Nobody looks good in green.

You Might Like This Movie If: You really want to see Micki and Maude get into a huge fight.


Really?: 1) I realize Rob (Moore) is supposed to be a funny and charming guy, so it’s within the realm of possibility that he could seduce and marry two attractive women, but this story would have been a tad more believable if Amy Irving and Ann Reinking didn’t tower over him. 2) So, we’re supposed to believe that Micki and Maude not only chose the same obstetrician, but they scheduled overlapping appointments on the same day, and they somehow give birth simultaneously at the same hospital?

Rating: Micki and Maude is a slightly-too-long, and highly contrived farce (see: “Synopsis” and “Really?”) that nevertheless delivers several good laughs. It's a lot of silly fun, if you're in the mood to park your brain at the door. Rob Salinger could have been a highly unlikeable character, but Moore makes him sympathetic, and he enjoys some good chemistry with Irving and Reinking. Oh, and watch for Andre the Giant and a few other early-1980s wrestling stars in some minor roles. 6.5/10 stars.