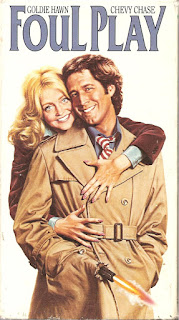 Dudley Moore Movie #4. (Yes, I realize this is really a Goldie Hawn film, but Dudley Moore does a highly memorable cameo).

Blurb From the VHS Jacket: “’Beward the Dwarf,’ whispers the hitchhiker to the beautiful librarian (Goldie Hawn) as he dies midway through a screening of This Gun Is Mine. Suddenly Hawn is propelled into a world of wild chases, bizarre attempts on her life, and deadly encounters with an assortment of weird underworld characters.”

What Did I Learn?: 1) Gents, if you're lucky enough to bring a woman who looks like Goldie Hawn back to your apartment, whatever you do, DON'T refer to it as your "own little beaver trap." 2) We live in a violent society - weirdos all around. Get them before they get you.

You Might Like This Movie If: You want to learn the subtle art of seduction from an expert.

Really?: 1) Foul Play is basically a spoof of films such as The Man Who Knew Too Much, and The Lady Vanishes, and isn't meant to be taken all that seriously, but come on - wouldn't there be about a zillion easier ways to assassinate a Pope than to murder the local archbishop, and have his estranged brother impersonate him for a year just to eventually get close to the Pontiff? And wouldn't killing a major religious leader produce a huge backlash against the goal (taxing the churches) of the terrorists? 2) Holy crap, how many times do we have to hear that God-awful Barry Manilow "Ready to take a chance again" song?

Rating: Goldie Hawn is  sweet, sexy (in a girl-next-door sort of way) and does a terrific job of carrying Foul Play. While the film is a bit dated in places (its pacing might seem a bit slow for contemporary audiences), and some of the jokes aren't that funny, Foul Play is both an enjoyable rom-com, and a nice tribute to Alfred Hitchcock. 8/10 stars.