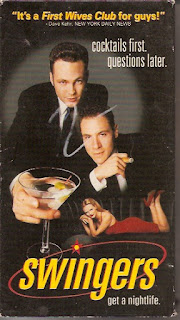 Synopsis: It’s basically 96 minutes of sleazy-but-loveable Vince Vaughn attempting to cheer up his whiny pal.
Blurb From the VHS Jacket: "Cocktails first. Questions later."
What Did I Learn?: 1) The beautiful babies don’t work the midnight to six shift at a casino on a Wednesday. 2) Two days is the minimum period of time (i.e. the “industry standard”) that must elapse before you can call a woman after she gives you her telephone number. 3) The LA Kings are either a “finesse team” or a “fucking bitch team.” 4) There’s nothing wrong with letting the girls know that you’re money and that you want to party. 5) It’s not a good idea to discuss ice cream and puppy dogs with women you’ve just met. 6) Everybody steals from everybody. That’s Hollywood.
You Might Like This Movie If: You enjoy watching otherwise-sane individuals get really excited about a really bad idea.
Really?: 1) With the single exception of this film, I’ve never once heard anyone, either in real life or in a work of fiction describe another person as “money.” 2) So, Mike (John Favreau) is a comedian? Ok, I have it on good authority that most stand-up comics are bitter, self-loathing assholes, but aren't they also supposed to be funny?
Rating:I was recently a bit surprised to learn that after eight years of writing Schuster at the Movies, I had yet to pen a review of Swingers. I’ve always carried a strong appreciation for this film, in spite of its obvious flaws (I’m thinking primarily of several scenes that carry on far too long, and writer Favreau’s odd decision not to develop the Trent character, or give the audience any indication of what makes him tick). Swingers is funny, clever, and it provides a number of interesting insights into breakups and life in the the bottom rungs of show business. That said, to this day I still can’t sit through the excruciating scene of Mike (Favreau) ruining his chances with Nikki when he foolishly decides to call her about 20 times in the middle of the night. Highly recommended. 9/10 stars.