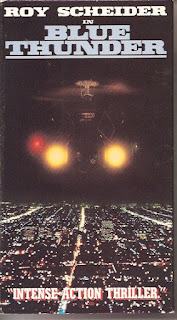 Synopsis: It’s basically Airwolf without the awesome theme music.
Blurb From the VHS Jacket: “Roy Schneider stars in this intense action thriller as a courageous police officer-pilot battling government fanatics planning to misuse an experimental attack helicopter.”
What Did I Learn?: “JAFO” stands for Just Another Fucking Observer.
You Might Like This Movie If: You really want to see the mediocre movie that inspired the mediocre TV series which featured a young, and completely miscast Dana Carvey.
Really?: 1) Gee, those heat-seeking missiles seem to take a LONG time to hit their targets, don’t they? 2) Doesn’t Murphy (Roy Scheider) ever sleep? Are we supposed to believe that he pulled an entire shift in his helicopter and then fought with his girlfriend at home, trespassed around the grounds of the McNeely residence, and then checked out Blue Thunder all in the course of one night? 2a) So, wait – Murphy is suspended from active duty, yet his boss nevertheless calls him in to inspect Blue Thunder at what – 5AM, after he pulled a night shift? 3) I’m curious – why doesn’t Murphy land Blue Thunder the minute he knows that Kate (Candy Clark) has delivered the tape to the TV station? Isn’t he simply making himself a target – and potentially endangering civilians – at that point? 4) Even if he’s exposing some major-league corruption, I had a hard time believing a veteran cop would fire a helicopter gunship cannon at police helicopters, patrol cars, or an F-16! (And how in the world is he able to inflict non-fatal injuries on those poor cops/pilots?) 5) Ok, I realize Murphy’s boss, Captain Braddock (Warren Oates) is a bit of a cover-my-ass kind of guy, but holy shit, does it ever occur to Murphy to tell him about the tape, or the conversation he overheard? If not Braddock, does Murphy trust anyone else in the police department? He’s a cop, for crying out loud! 6) Let me see…. Murphy is asked to test pilot Blue Thunder by the very people who committed the murder he’s investigating? And on a whim, he looks up Cochrane (Malcolm MacDowell) on the database, follows him, and manages to record a conversation that incriminates everyone involved? Coinky-dinks! 7) Why would Blue Thunder’s engineers place the super-sensitive microphones between the helicopter’s engines and rotors? How could it possibly pick up any ground-level noises? 8) Hold on…..Cochrane decides to murder Murphy and Lymangood (is that a real name) by removing a cotter pin and loosening a bolt on their helicopter just because Lymangood doesn’t like the guy, and Murphy doesn’t actually know anything?  9) So, just how screwed-up is Murphy? At one point we see him paralyzed by a Vietnam flashback, so I have to wonder why he’s still on the police force.
Rating: Blue Thunder is a rather ho-hum thriller that’s fine for an evening’s entertainment, but it suffers from a script that doesn’t make a lot of sense (the movie was originally conceived as the story of a Vietnam vet police chopper pilot who goes nuts during a patrol, and later re-jigged as a government conspiracy flick) and a second act that really drags. 5.5/10 stars.