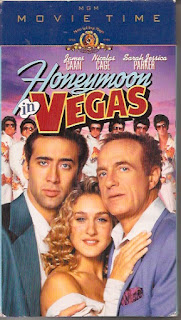 Gambling Addiction Movie #3
Synopsis: Nicholas Cage makes some really bad decisions in Sin City….no, that’s the Synopsis for Leaving Las Vegas. Um…. Nicholas Cage wears loud clothing and struts around a casino….no, that’s Snake Eyes. Um....ok, Nicholas Cage acts like Elvis and falls apart when somebody comes between him and the cute blonde he loves....no, that's Wild at Heart.
Blurb From the VHS Jacket: "Featuring a glittery Las Vegas atmosphere, lush Hawaiian scenery and a bevy of Elvis impersonators - including a flock of light-the-night-sky parachuting Elvises(!) - Honeymoon in Vegas is a 'hunka hunka burnin' fun' (Houston Post) and 'an absolute don't miss' (Marilyn Beck) that's sure to 'make you laugh a lot' (The Wall Street Journal)!"
What Did I Learn?: 1) A straight flush is not quite unbeatable. 2) Nothing in this world is fool-proof aside from a Coupe de Ville…and hookers! 3) People get married and then they do the most hideous, unbelievable things to each other. 4) Yellow, then red.
You Might Like This Movie If: You're firmly believe an Elvis impersonation = entertainment gold.
Really?: 1) Wait – Jack (Cage) has a straight flush and still manages to lose to Tommy (Caan), who also has a straight flush, and we’re assured the game was legitimate? That seems awfully fishy. 2) Gee, Tommy suddenly transforms an abusive and controlling villain rather late in the third act, doesn’t he? 3) So, Jack is a private investigator back in New York. It’s strange how he uses none of his surveillance or tracking skills, and his odd profession is never mentioned past the second act. 4) Holy shit, over how many days does this film take place? Tommy’s prize is a mere weekend with Betsy (Sarah Jessica Parker), yet Jack somehow manages to criss-cross the entire country. Come to think of it, where does he get the money for those flights? I thought he was basically broke. 5) What was the point of Peter Boyle’s character?
Rating: Honeymoon in Vegas is a highly contrived, and rather uninspired romantic comedy that feels as though it went through a number of re-writes and some of its elements don’t mesh well with others (see: “Really?”) The film is sporadically funny in places (I’ll admit that I liked the exchanges between Cage and Pat Morita), and Caan is great as the charming-yet-menacing professional gambler, but he’s a little too old to play a convincing suiter for Parker’s character. Meh. 5.5/10 stars.