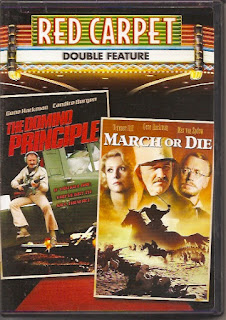 Gene Hackman movie #3
Synopsis: Post-WWI French soldiers come to the sad realization their country is in for a long, long period of getting its ass kicked.
Blurb From the DVD Jacket: "At the end of World War I, Major Foster (GENE HACKMAN), a tough, bitter American who was forced to resign from West Point and is now in the French Foreign Legion, is ordered, with his legionnaires, to protect an archeological expedition headed by Francois Marneau (MAX VON SYDOW) of the Louvre, who is to excavate for a priceless tomb in Morocco."
What Did I Learn?: When a sadistic drill sergeant asks you to state your former occupation, it’s not a great idea to reply: “Premier of France!”
You Might Like This Movie If: You've always been tempted to join the Legion.
Really?: 1) I have to admit that I don’t know all that much about the French Foreign Legion, but I was a little surprised when the legionnaires in this movie underwent zero basic training before they were sent to Morocco. 2) I’m curious: would Muslim tribesmen really feel much kinship with the corpse of a 3,000-year old pagan female warrior nicknamed the Angel of the Desert? 3) Hold on - Marneau - the completely amoral art historian who doesn’t give a shit about the plight of his colleagues or the men who protect them is one of the only Frenchmen to survive the big assault? That seems a little unsatisfying. 4) I realize the Legion had a reputation for accepting anyone as a recruit without asking any questions about their past, but why in the world would they take in Marco the pickpocket? Who would be dumb enough to trust that guy?
Rating: I wanted to like March or Die, but I would have to describe it as slow-moving and strangely confused about the story it wants to tell: does it want to condemn the Legion for brutality within its ranks and serving as an instrument of French colonialism, or celebrate the derring-do of legionnaires like Marco? For that reason, we’re never entirely sure if we ought to like Hackman’s character or not. Check it out if you’re a fan of the Indiana Jones franchise and you want to see its rather obvious influence on George Lucas and Steven Spielberg when they made Raiders of the Lost Ark. 6/10 stars.