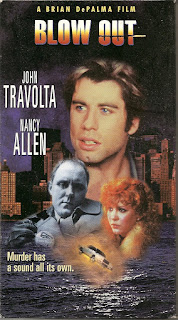 
Blurb From the VHS Jacket: "While recording sound effects for film, Jack Terry (Travolta) accidentally records a blowout as he watches a speeding car plummet into a murky river. Jack dives in and saves a young woman, Sally (Nancy Allen), but the driver - a high-ranking political candidate - is dead. Jack is told to forget the whole incident."


What Did I Learn?: 1) "No one wants to know about conspiracy any more." 2) If you possess photographs or an audio recording that challenges the official narrative of a political assassination, burn the evidence and don't tell anyone!!


Really?: 1) Wait - Jack is injured in a car crash, gets knocked out, and doesn't wake up until some time has passed (it's now nighttime), and yet Sally is not only still alive, but he's able to continue tracking her? 2) Hold on - I had a very hard time believing Jack was somehow able to create a synced audio-visual movie of the crash using still photos he clipped out of a magazine.


Rating: While Travolta and Allen share very little on-screen chemistry, and the script has a few credibility problems (see: "Really?") Blow Out is a solid suspense thriller that will keep you on the edge of your seat. 8/10 stars.