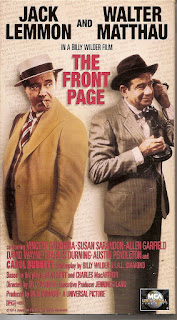 Dang – this movie would have been perfect for my salute to Jack Lemmon and Walter Matthau!

Blurb From the VHS Jacket: “The ruthless managing editor of a Chicago newspaper, Walter Burns (Walther Matthau) angrily learns his ace reporter Hildy Johnson (Jack Lemmon) plans to leave the paper to get married and enter the advertising business. Meanwhile, Hildy is breaking in a new reporter at the Criminal Courts Building when all hell breaks loose.”

What Did I Learn?: The electric chair lends itself to creating better headlines than the noose.

You Might Like This Movie If: You figure it must be a two-hour episode of a certain show.


Really?: The Front Page is a screwball comedy, so it seems a little unfair to judge it on its overall credibility. That said, I had a hard time believing Hildy wouldn’t quit on the spot the moment he discovers Burns has falsely told Peggy (Susan Sarandon) that he’s some sort of sex pervert.

Rating: The Front Page is a fast-paced, and generally funny adaptation of the Ben Hecht/Charles McArthur’s 1928 Broadway comedy. Lemmon and Matthau share a natural chemistry as the charming Hildy and the cynical-but-loveable Burns, but they don't enjoy a lot of screen time together. While the film features an impressive cast, it's a little too stagey for my taste. Even worse, many of the actors wildly overact (Carol Burnett really didn't like her performance, and actually apologized for it), and resort to yelling and shouting, making The Front Page a surprisingly loud movie. 7/10 stars.